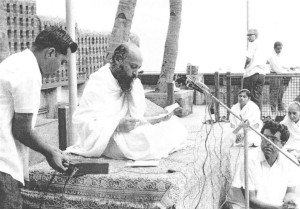 Osho is invited to Bombay to give a series of five talks of “love”, in the prestigious Bharatiya Vidya Bhawan Auditorium. In the first discourse on August 28, Osho explains that love and meditation arise as a transformation of sexual energy, and that if sex is suppressed it cannot be transformed. Many people are outraged that He talked about sex, and the owner of the auditorium cancels the series.

On September 28, Osho returns to Bombay to complete the talks to a very large audience at the Gwalior Tank Maidan. The series is published under the title From Sex To Superconsciousness, which becomes His most read book. The indian press begins to refer to call Him as the “Sex Guru”.

From September 26 to October 5 1970, Osho holds a meditation camp in Kulu Manali at the foothills of Himalayas. On September 26, He initiates His first group of disciples, which he calls “neo-sannyasins”. His version of this ancient Hindu institution is radically different from tradition, where the seeker renounces all possessions and relationships; is celibate, and lives on what he or she is given by those who remain engaged in society. As Osho begins to define to define “neo-sannyas”, His challenge to the tradition becomes increasingly clear. 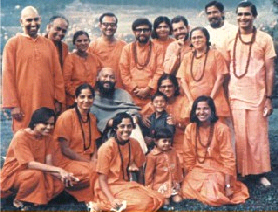 Osho’s sannyasins are asked to wear shades of red and orange. They also receive a necklace from Osho, known as a mala, which consists of one hundred and eight beads plus a locket with Osho’s picture. In addition, Osho gives each sannyasin a new name. The new name includes a prefix, common to all– the prefix “swami” for men and “ma” for women.

“ The ancient meaning of sannyas is renouncing the world. I am against it… To me, sannyas means a commitment that “I am going to clean myself completely of all those things that have been imposed upon me, and I will start living on my own– fresh, young, pure, unpolluted”. So sannyas is initiation into your innocence.

Slowly, slowly I started sorting out my people, and just to sort them out I started initiating them into sannyas so that I could recognize them and know who my people are. I started giving them names so I could remember, because it is difficult for me to remember all kinds of strange names from around the world. The real reason was simply to have names that I could remember; otherwise it would be impossible for me. Now there are people from almost all the countries, of all languages: it is impossible to remember their names. 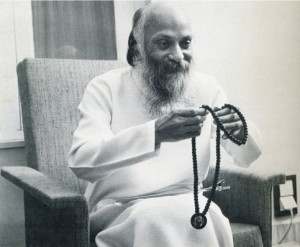 I have given you the red clothes for the simple reason so that I can recognize you; all other excuses are just hogwash. Just to give you good reasons–because people will be asking you and you will have to give good reasons to them–I have been trying to make a philosophy out of nothing. But the truth is simply this, nothing more than this.”

In May 1971, Osho changes His name from Acharya Shree Rajneesh to Bhagwan Shree Rajneesh and for the first time publicly acknowledges that He is enlightened. 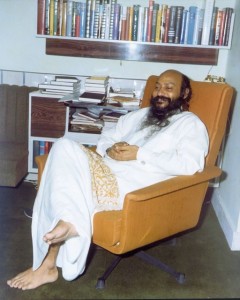 Osho moves to a large apartment in the Woodlands complex in Bombay, where He lives until March 1974. Now that Osho is settled, He is able to work more closely with individuals. He meets people individually or in small groups, and gives regular talks, including His talks on the one hundred and twelve meditation techniques of the Vigyan Bhairav Tantra, which He calls “The Book of Secrets”. Sannyasins and other seekers meet every morning on a nearby beach to do Dynamic Meditation together.

In addition, Osho still occasionally hosts meditation camp in the country-side. More and more Westerners begin to arrive to meet Him, and many are initiated into sannyas. 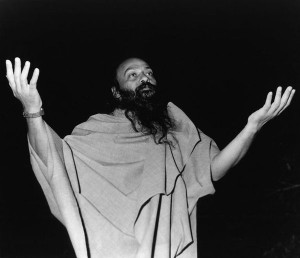 Osho brings a five piece congo drum band to a July 1973 meditation camp, and when He finally settles in Pune He works with disciples to compose music to accompany each of the active meditations He has developed.

Your mind is chaos. That chaos has to be brought out, acted out. Chaotic music can be helpful, so if you are meditating and chaotic music is played, it will help you to bring out your chaos. You will flow in it, you will become unafraid of expression. And this chaotic music will hit your chaotic mind within and will bring it out. It helps.

On March 21, 1974, exactly twenty-one years after His enlightenment, Osho moves to Koregaon Park in Pune, where two residences in adjoining properties of six acres have been purchased. He holds interviews on the lawn only with sannyasins arriving or leaving and no longer meets with individuals seeking advice or private interviews.

‘The great path has no gates, Thousands of roads enter it. When one passes through this gateless gate, He walks freely between heaven and earth’.

In June 1974, Osho introduces the first meditation camp in Pune with the announcement that a new phase of His work will begin. From now on He will work only with authentic seekers. And for the first time, Osho does not lead the meditations in person. Instead, His empty chair is brought into the meditation hall. … It always happens when a Buddha is there: His physical presence becomes so meaningful, and then He dies and everything is shattered. 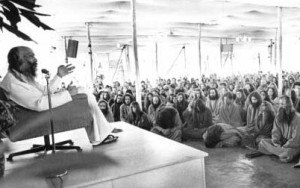 This is my promise: I will be there in the empty chair, the empty chair will not really be empty…That is why I say a new phase of my work starts with this camp– and I am calling it a Samadhi Sadhna Shibir. It is not only meditation, it is absolute ecstasy that I am going to teach to you. It is not only the first step, it is the last.

From July 1974, Osho continues to give discourses every morning until 1981, speaking on alternate months in Hindi or English. He comments on the teachings of enlightened mystics in many spiritual traditions:Tao, Zen, Christianity, Hassidism, Sufism, the Bauls, Hindu mystics, Tibetan Buddhism, Tantra, etc. On alternate days He answers questions submitted to Him by His audience. Each series of ten days is published as one book– over two hundred and forty books in seven years.